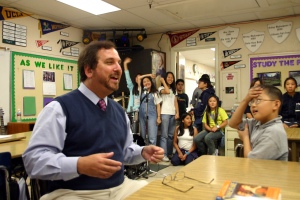 I did my classroom observation last week in the room of a legendary teacher. The mature behavior of his 5th grade students is famous. Classroom management is an area of particular interest for me so I was excited to see what his class looked like for an entire day. It was extraordinary. At 7:10 am, during pre-school music practice, I was immediately offered a bottle of water by one student, then a minute later, by another. The students were quiet and respectful throughout the day – without exception. To be sure, when they played baseball first period, they were normal kids – except that they were uniformly supportive of their teammates and their opponents. It was extraordinary how much time was saved and how much less tiring the day was (especially because the day was 7 am to 4 pm…).

The reason I bring this up here is that taking risks and making mistakes is such a critical part of learning. Creating an atmosphere where that can safely take place is perhaps the hardest thing for a teacher to do. Even extraordinary teachers often don’t intrude on (or know about) the subtle interactions between students. I am coming to believe that the classroom atmosphere has to be something that follows my students 24 hours a day. While this sounds over the top, a classroom can’t be safe if the students are mocked for their in class mistakes away from my sight. Of course, such an intention can’t be fulfilled through coercion. I have no reach beyond the classroom. However, it can be achieved (as demonstrated above) with the proper teaching as the school year begins and reinforcement as it proceeds.

The classroom I observed has a motto, “Work hard, be nice.” Nice is a core value reinforced everyday. Students who misbehave while other students are talking are asked, “You’re acting as if Jorge doesn’t matter. Does Jorge matter?” Harsh, but very true and very effective. As for discipline, the teacher has a simple rule: the class activities have to be interesting enough such that not being allowed to participate is punishment enough. The teacher holds himself and all his students to an extremely high behavioral (and academic) expectation. It works beautifully.

In his class, there is no issue pursuing questioning with struggling students. There is no issue when students make mistakes. In fact, he said at one point, “Thank you for getting it (a math problem) wrong and allowing us to learn with you.”

I think the ultimate testament of how effective his strategy is came in reviewing the answers to the same math quiz. When the teacher asked if anybody had gotten a particular problem wrong, one of the students raised her hand and said that she’d gotten the problem right but didn’t really understand it. Now that’s something special and something to aspire to.

© MobilisMobili.com, 2008-2012. Unauthorized use and/or duplication of this material without express and written permission from this blog’s author and/or owner is strictly prohibited. Excerpts and links may be used, provided that full and clear credit is given to MobilisMobili.com with appropriate and specific direction to the original content.
%d bloggers like this: